Here’s another entry in the modular notebook field, the X17 Notebook, which was kindly sent to me for review by the German manufacturer. (They also make the X47 notebooks, which are a more upscale version in leather, with a metal rod that holds the inserts, and their format is used in DayRunner’s “Life Tracker” notebooks.)

The model I was sent is their A6 size “Balacron” cover. This is their “Moleskine-like” cover, but they have various other materials available, including leathers, nylon and polypropelene. 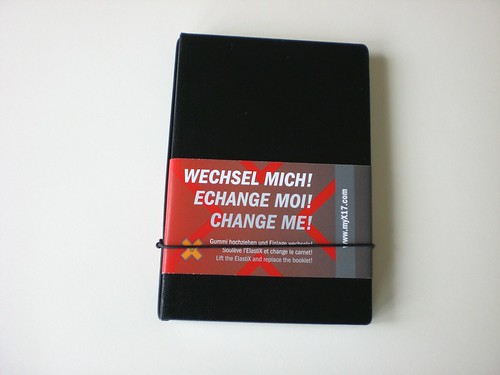 The cover is very similar to a hardcover pocket size Moleskine, though slightly larger. As with the Kolo Essex notebook, the rubber bands that hold the inserts wrap around the outside of the spine. The bands are made of a rubbery plastic– they remind me of a certain type of rubber bracelet that was trendy in the mid-80s, I think because Madonna wore them! The bands are joined in a knot where one of them loops around to become the closure for the notebook. When you pull this off to open the notebook, it flaps loose, just like the Piccadilly Primo’s horizontal elastic closure.Â Â Â  Also, on the X17, I found that the knot moved somewhat, shifting further down the spine due to the tension in the knot. I kept wondering if the knot would somehow work itself loose, knowing I’d never be able to figure out how to re-tie it! 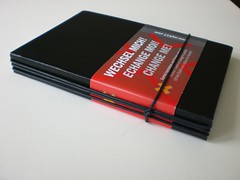 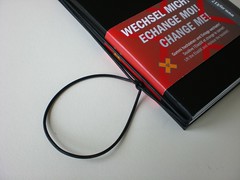 Once you’ve undone the knot, you can remove the paper band with the branding, leaving a nice plain black cover with no markings on it. The only branding is on the inside, where the X17 logo appears on the first page of the inserts. The cover is plain black inside, with no back pocket. 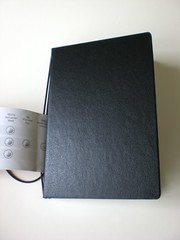 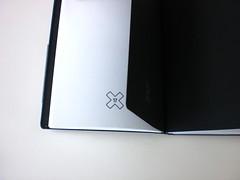 The model I received had plain, lined and squared inserts. Calendars and other designs are also available. 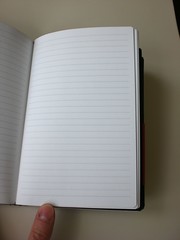 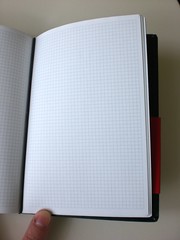 Below you can see that the cover material is quite thin. Though it doesn’t overlap the inserts by much, you’ll notice that it’s not quite square when closed– it’s nice that there’s room to paste some stuff in the pages and still have it lie flat, but if you don’t add any bulk within, the notebook will have a slightly wedge-like shape. 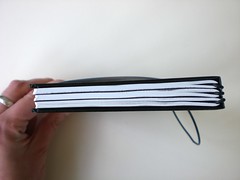 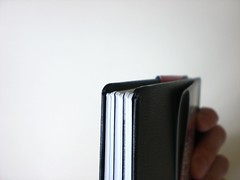 The cover has notches at the top for the elastic bands to sit in: 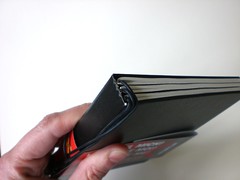 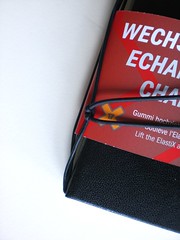 The paper feels nice to write on– fairly smooth, and it performed well with all my usual pens (one of which ran out during my testing!) None of the pens showed any feathering. The paper is acid-free. Show-through was about average, and a couple of pens bled through a bit. 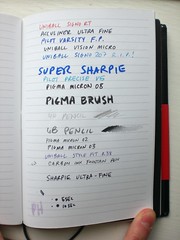 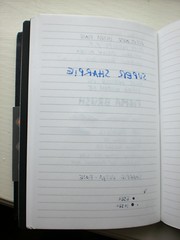 All in all, I think this is a pretty nice notebook. There are certain things about it that don’t suit my personal preferences, such as the wedge shape, the A6 size being a little wider than I prefer, and the lack of a pocket, but I don’t consider these flaws. I do worry that the cover might not be durable enough to last through multiple cycles of inserts being used and replaced– I think their other cover materials looked a bit tougher, even if they don’t look like a Moleskine. My biggest concern is that the rubber band closure is awkward– I’d rather have a traditional vertical fastener, or nothing at all.

The X17 brand is mainly available in Europe, aside from the DayRunner LifeTracker version that is sold in the USA. But if you’d like to give one a try, take a shot at my latest giveaway! I’ve got another one just like this review sample that I’ll give to one randomly selected winner from entries submitted as follows:

On your blog, post something containing the word â€œX17â€ and â€œNotebookStoriesâ€ and link back to this post.