Sometimes a notebook can be a special hidden surprise, as I discovered in the case of this beautiful wooden box. 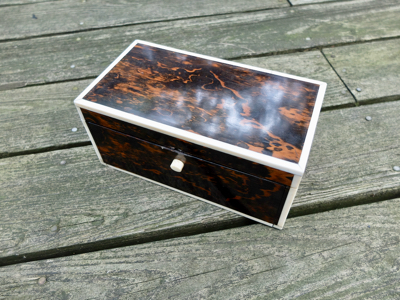 The box originally belonged to the grandparents of a friend of mine, and had been saved by her parents. It turned up when we were clearing out their house in preparation for a move. My friend’s mother said no one could figure how to open it, and you could see that someone had tried to force the latch open, damaging the wood slightly. I figured out that a little gentle jiggling while pressing on the button would do the trick, and the inside of the box, which probably hadn’t been opened very often, was even more beautiful than the outside. 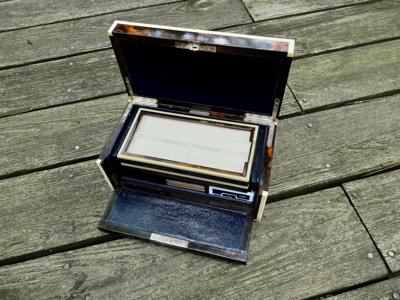 The box was originally made by Clark, of 33 New Bond Street in London. The company no longer exists, but in the 1800s and early 1900s, they seem to have made various small cases and luggage and silver items for high-end customers including the British royal family. 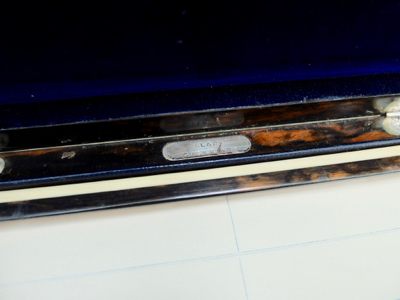 I’m not sure what wood this box was made of, but it has a beautiful color and grain (which was hard to photograph without reflections and isn’t at all done justice by my pictures). The edges are trimmed with, I suspect, ivory, which would be illegal today. The inside of the box is lined with a gorgeous deep blue velvet that almost seems to glow (also impossible to capture in photos) and leather in a matching shade. The hinges and latch may be silver. (If Antiques Roadshow ever came to town, it would be fun to see what else I could learn!) 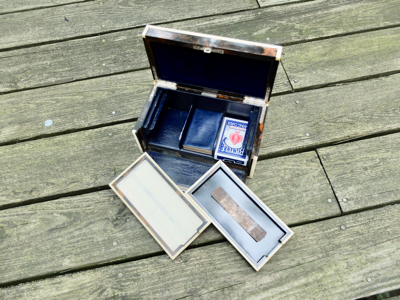 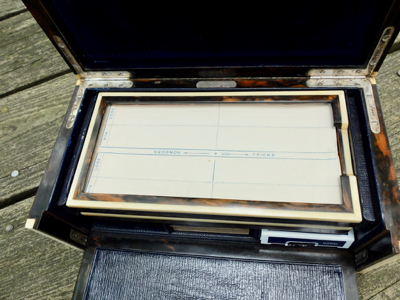 The box holds equipment for playing cards. There are two removable trays that hold score-keeping sheets. Underneath, there are slots for two decks of cards (the one deck in the box is a modern one, so any that were originally included in the box must be long gone). Best of all, in the middle slot there is a tiny notebook! 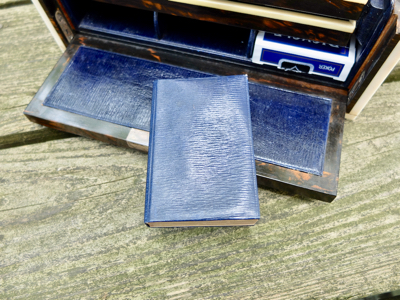 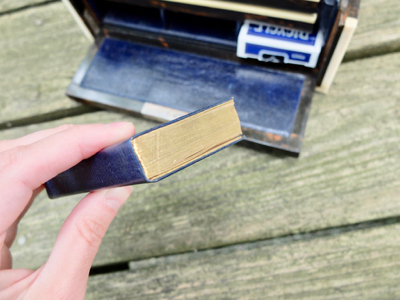 The notebook has a blue leather cover matching the trim on the box. The edges are gilded. The pages inside are all the same format– a grid for a list of names and game results. Nothing was ever written in the notebook. 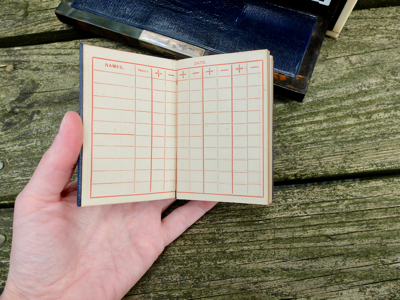 This box really feels like a little treasure chest to me. And since no one in the family wanted it, it is now MY little treasure! I’ve been thinking about how I could use it. The trays for the score sheets have a metal spring on them that I guess is meant to hold the sheets in place. I was thinking I could unscrew these metal pieces and then use the trays to hold pens. But other than card decks, I’m not sure what I could put in the bottom slots on either side of the little notebook. Whatever I do with this box, I will certainly enjoy having it, and I’ll always remember what a wonderful surprise it was to find a notebook inside!

4 thoughts on “A Surprise Notebook”